Setting the Tone: How Physics Can Help Us Understand Musical Harmony (Part 1)

*Editor’s Note: This post has several sound files to help readers understand the author’s message better. These sound files can be accessed via bolded links.

At my elementary school, entering the fifth grade meant we could finally join the school band, and for most of us, that was a big deal. I had been set on playing the clarinet for ages, so I was ready and raring to immediately dive into “Hot Cross Buns” and “Mary had a Little Lamb.”

But before we could do that, we had to learn how to name the building blocks of those songs and the sounds we were making: the musical notes. Our learner books instructed us to orient our fingers in a certain way and call the sound that came out a “G.” Western music labels its tones with the letters A through G. There are also modified notes (sharp and flat) such that we reach twelve total note names.

As I advanced in my musical training, I recognized that multiple tones correspond to the name “G.” We spoke of them sounding “higher” or “lower” than our original G, but they were still the same note. Later on, we were introduced to a device called a tuner that could tell us how close the sound we were playing was to an ideal version of that note.

Growing up immersed in western music impressed upon us a sense of certain notes sounding better, when played in combination with a G, than others. At the root of it all, there had to be something that made a G a G, differentiating it from other notes, and determining how it would interact with those other notes.

We will explore these ideas and more with the help of an unlikely hero – physics. I am now working toward a PhD in Applied Physics, but I first put physics into practice as a kid just starting out on clarinet. Physics gives us a language for talking about musical notes and their relationships, and all we need to start our discussion is a single guitar string.

Making Physical Sense of Our Sounds

Imagine a string, tied down at both ends and pulled tight. When you pluck it, it vibrates up and down (see Figure 1). This vibration travels through the air to our ears, and our brain perceives it as sound. The vibration is called a wave, a disturbance in a medium that travels with a fixed shape, repeating itself in either space or time. We’ll focus on two closely related properties of waves: wavelength and frequency.

Wavelength is simply the physical distance it takes for the wave motion to repeat itself. It’s easiest to visualize this with a sine wave, which you may recognize from high school algebra. The wavelength is the distance it takes for the sine wave to rise to its maximum, fall to its minimum, and then return to its starting point. Figure 2 shows a sine wave traveling three wavelengths.

On the other hand, we can look at the frequency, which tells us how many times the string goes from its maximum height to its minimum and back again in a set amount of time. In Figure 3, we have three vibrating strings with the same wavelength but different frequencies.

When you multiply frequency and wavelength together, you get the speed of the wave in the string. 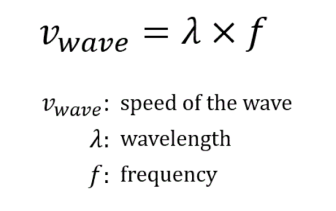 The material we choose for our string and how tightly we stretch it out (the tension) determine our wave speed. Keep this in mind the next time you see guitarists tightening and loosening their strings to get the right sound!

We now have two ways to describe our sound, frequency and wavelength. Which should we use? We pluck the string, which begins to vibrate. This in turn vibrates the surrounding air at the same frequency. But the speed of the wave in the string will not necessarily be the same as the speed of sound in air. So while the frequency of the string and its resulting sound are the same, their wavelengths are not.

Plus, my clarinet doesn’t have strings. Unlike wavelengths, vibration frequencies can be compared across instruments. This is the standard in today’s western music. For example, the note called “A above middle C” is defined as 440 vibrations per second, or 440 Hertz (Hz). A440 is the standard note used for tuning in many orchestral settings. By measuring the frequency of the sound I was playing, my tuner compared my frequency to the standard frequency and judged how close my instrument was to the standard.

This explains how the tuner knew whether I was playing an A or a G. But the tuner called certain other notes A as well, even at very different frequencies. To understand why some notes share the same name, we need to go back further than my young days in band, all the way to ancient Greece.

Next week, we will discover what our favorite combinations of musical notes might have in common. Physics can explain harmony, too!

Joe Iafrate just finished his third year in the Applied Physics PhD program at the University of Michigan. He studies the ways you can use light and electric fields to generate, control, and measure electron spins in semiconductors. Born and raised in Metro Detroit, Joe spent four awesome years in western Massachusetts at Williams College, graduating with a BA in Physics and Mathematics. Joe used to spend all his free time playing and arranging music for groups at Williams, but these days he spends most of his time following Major League Baseball and his favorite team, the Detroit Tigers. If you ever want to talk baseball or catch a game, feel free to reach out!

Read all posts by Joe here.

2 thoughts on “Setting the Tone: How Physics Can Help Us Understand Musical Harmony (Part 1)”