From the MiSciWriters Editorial Board

Saturday, April 22nd, 2017- Thousands of scientists and citizens came together in celebration of scientific achievement and its influence upon public health and environmental safety, but also in protest of proposed budget cuts and spread of “alternative facts.” Not only was this march staged in Washington D.C., but there were 610 satellite events all around the world including Ann Arbor.

Along with the primary goal to increase public understanding of science, the March for Science was also intended to prove science’s political worth to remain within the budget. Now, a week after the event, we ask ourselves: Did the March meet these goals? What further actions need to be taken?

On the day of the March through the pouring rain, the marchers in D.C. chanted phrases like “Science, not silence” harking to the gagging orders of organizations like the Environmental Protection Agency, and “policy needs peer review.” This crowd of protestors was decorated by a sea of signs ranging from witty to solemn, each representing the protester’s views on the proposed cut in science funding, climate change, or “alternative facts.”

Advocating for Science and Its Application for Society

Irene Park, a fifth-year human genetics PhD student and editor-in-chief at MiSciWriters, surprised herself by traveling to attend the march in D.C. because she is an introvert and does not enjoy large crowds and public speaking. But she, like so many others, realized that not speaking up during this crucial time in history would encourage people to make false statements and policymakers to abandon science. Irene says, “I had to be my biggest advocate.”

There is a widespread fear, especially by scientists, that the foundation of science is being called into question by the current administration and the culture that surrounds it. Irene says she is utterly horrified to live in a society in which people who undermine the value of objective truth get what they want because they have loud voices. If people can support their claims with alternative facts, what else can they get away with?

She says that the movement is also about supporting the scientific research, including the ones funded by government agencies like the National Institutes of Health or the EPA. Many breakthroughs in medicine and technology, as well as basic research, have helped society’s continued existence.

But as Scott Barolo, an Associate Professor of Cell and Developmental Biology at the UM Medical School and the Director of the Program in Biomedical Sciences (PIBS), said in his speech at the Ann Arbor March for Science: “Science is hard; it’s expensive; it’s slow.” Because of this, it can be very difficult to demonstrate that a research project will have grand effects on solving a problem or curing a disease. Many times, an experiment doesn’t work as planned but nevertheless, something is learned about the universe we live in.

And that is so important for scientists to be able to do: ask important questions, notice interesting and unexplainable phenomena, and have the freedom to explore it. 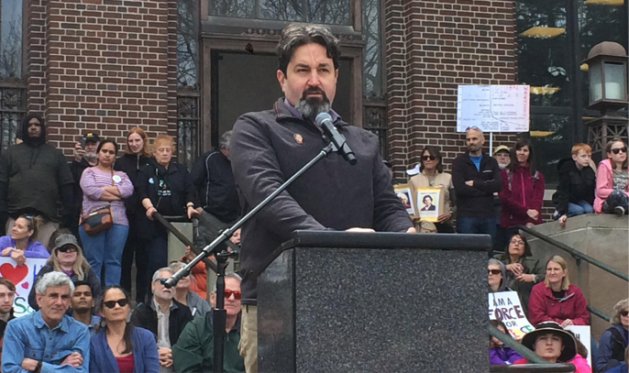 The Importance of Science Communication

For both the experiments to be done and the applicable technology to be developed, communication is key. The ability to share ideas and collaborate around the world has sped up the process of science itself and permitted the use of scientific findings in every avenue of the human enterprise including engineering, energy, agriculture, and medicine.

Within science and industry, communication might be going smoothly but outreach to the community still needs a lot of help. Scott says that many people have a view of scientists as selfish and elitist, with the goal to destroy religious faith. How could this be, given the increasing amount of information and connectivity? Scott thinks it is because science has its own language that is only accessible by scientists.

“During the march today, if someone asks you, “Are you a scientist? What do you study?” and you say, “I use high-throughput proteomics to study the palmitoylation of membrane-associated proteins in the Golgi,” what you’re really saying is: “You’re not smart enough to understand what I do. You don’t deserve to understand.” It’s no wonder people think we’re elitists: we speak in our own special language, and we don’t explain how our work helps people.”

If science has such applicability to our day to day lives, and it does, scientists need to be able to explain to others why it is important in a way that’s relatable and interesting. Scott ends his speech with a call to action:

“Let’s remember that science is, and should be, for everyone—and let’s challenge each other to do better.”

Will the March Yield Long-Term Benefits?

Although there was an incredible support for the March itself, there was skepticism and criticism about its purpose and effectiveness, with the biggest issue being being a lack of unity toward a central goal. Between the official website and the Facebook group, there were 21 different statements ranging from a celebratory passion for science and its application to protesting the Trump administration’s recent actions. There were also mixed messages about the political nature of the March, some saying that the event was not intended to be political while others stating that science has always been political.

This, along with a few other reasons, is why Sarah Kearns, a first-year Chemical Biology student and a contributor to MiSciWriters, did not attend the March. She understands that there are many goals of activism and that people attended the March for a multitude of reasons. However, she was skeptical that getting thousands of people into the streets for such varied reasons will yield the long-term impact that activists desire.

Sarah argues that the majority of the controversy surround the march is not whether claims are evidence-based but about what to do with the data moving forward. Often, people have mistakenly said that certain science policy decisions (e.g. the suggestion of a budget cut) are full-fledged attacks on the scientific method. The government is not the only agency that can fund good science. She says, “there is a significant difference between scientific data and a political mitigation plan based on the means of solving a problem.” Threats to withdraw funding from the government “does not mean that science isn’t important or beneficial” to the whole of society. Private companies and industry continue to research and develop new techniques in lieu of grants, not unlike SpaceX conducting launches instead of NASA.

The continued efforts of science communication can help solve many of the issues by establishing a community that understands and is passionate about science and the way it betters society. An incredible thing that the March accomplished was to focus the world’s attention and momentum on discussing the role of science in politics and government and initiating the public dialogue about science.

Post-march, we need to continue these conversations. We need to focus on specific actions that both scientists and nonscientists can take to promote their ideas in a more applied way. But this needs to go both ways: Scientists need to listen too instead of simply attempting to instruct others about scientific principles and policy decisions. Scientists and the public need to work together to solve these issues as part of a larger community.

The March for Science organizers have declared this week a “week of action” to advocate science, dedicating each day for different causes. Today, Thursday, is dedicated to science communication. Good communication skills are essential for any science outreach events or conversation with non-experts to raise their understanding of and appreciation for science.

For those interested in science communication, RELATE, a student-led organization at University of Michigan, is providing the opportunity to become more engaged after the March. RELATE and the UM Office of Academic Innovation are hosting a Teach-Out course called “Stand Up for Science: Practical Approaches to Discussing Science That Matters” starting May 5th. This free, online class will facilitate discussion about scientific communication, provide a platform to practice, and highlight opportunities to engage the public. Anyone is welcome to enroll and attend.