Microbial α-L-Rhamnosidase: an important enzyme for the pharmaceutical and food industries

Molds or fungi are generally known for their pathogenic properties, but they are also used in the food and pharmaceutical industries. We can find several examples of uses in our daily lives including yeast used in brewing and baking, Aspergillus species used in making Soy sauce, and Penicillium species used in cheese industries. Penicillium species also make antibiotics like Penicillin.

During my thesis, my project was to search for fungi which produce alpha-L-Rhamnosidase, an enzyme that cuts the terminal L-rhamnose from several glycosylated compounds: compounds that have sugar attached. L-rhamnose is sweet in taste but not found in nature in its free form. It is always attached to several other biomolecules from lipid/fat molecules to proteins to other metabolites like flavonoids, steroids, or terpenoids (Figure 1).

Fig. 1: L-rhamnose can be attached to different molecular entities and can be cleaved from these molecules by alpha-L-Rhamnosidase into free L-rhamnose.

The sweet taste of L-rhamnose and being a non-digestible carbohydrate makes it an option to use in our foods/drinks as a sweetener for type-2 diabetic patients. Diabetes is a disease related to high sugar consumption and once a person is diagnosed with this disease, they have to be very cautious about eating foods with sugar for their entire life. It is a growing health concern worldwide, with the number of people with diabetes projected to increase 150% in the next 25 years. In the human body, L-rhamnose is converted into propionate, which inhibits the formation of fat molecules and is also known to have an anti-hunger effect. The increased amount of fat in the body is one of the major reasons for type-2 diabetes.

In addition to the potential uses of L-rhamnose, the parts of the molecule left after L-rhamnose is removed can have medicinal properties. For example, naringin, a molecule found in citrus fruits like oranges, lemons, and clementines, is a potential target for the enzymatic action of α-L-rhamnosidase. Naringin breaks down to prunin and rhamnose. Prunin has been shown to decrease fatty acid levels in the blood of rats, have antioxidant activity, and reduce inflammation in human cells. Another compound, quercitin (Quercitrin ‘a flavonoid’ minus L-rhamnose), exhibits antiviral activity against Dengue virus. Thus, identifying fungi that produce alpha-L-Rhamnosidase has several potentially revolutionary applications across the food and pharmaceutical industries.

In the search for fungal strains that produce significant amounts of α-L-rhamnosidase, I isolated more than one hundred fungal strains from agriculture waste. I then grew each strain individually in a sterile liquid media supplemented with a plant-based waste product like corn cobs, wheat bran, wheat straws, rice husks, bagasse and rutin, a flavonoid found in fruits that contains L-rhamnose. To measure α-L-rhamnosidase activity for these fungi, I monitored a change in color from yellow-colored naringin, which, following α-L-rhamnosidase activity, breaks down to the colorless compounds, L-rhamnose and prunin. Hence, by monitoring the total decrease in the yellow color of naringin in the reaction solution for several days, I was able to identify fungi with high α-L-rhamnosidase activity.

From this initial screening, I identified three potential α-L-rhamnosidase producing fungal strains: Aspergillus clavato-nanicus, Aspergillus flavus, and Penicillium griseoroseum. All these three fungal strains produced maximum enzyme when they were grown in media that contains rutin as the substrate. α-L-rhamnosidase was then purified using different standard protein purification steps. After purifying the enzyme, I identified temperature and pH for maximum activity. I have evaluated its industrial potential by demonstrating the conversion of naringin to prunin using the purified enzyme.

In conclusion, my research resulted in the identification of three potential fungal strains that can be utilized in producing the enzyme α-L-rhamnosidase. And the enzyme can be further utilized in making L-rhamnose, a new sweetener, and other entities that are important for medicinal purposes and in the food industry for producing bioactive compounds. 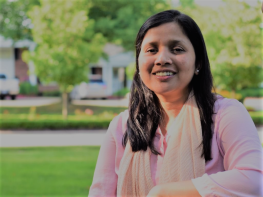 Vinita finished her Ph.D. in Chemistry from DDU Gorakhpur University, Gorakhpur, Uttar Pradesh, India. She moved to Ann Arbor with her husband. Initially, she worked to explore the role of Hydrogen sulfide in endoplasmic stress conditions with Dr. Omer Kabil & Prof. Ruma Banerjee in the Biological Chemistry Department at UMICH as Research Tech Intermediate. For the last three years, she is working with Dr. Yogen Kanthi in the Cardiovascular Division at UMICH and investigating the molecules responsible for heart disease like deep vein thrombosis. She enjoys gardening, crafting and learning through conversation to know the world more. You can connect her on LinkedIn.