What if you could play a game to improve your memory or rehabilitate after a stroke? And I don’t mean Sudoku or crossword puzzles either. I’m talking video games!

It’s no secret that gaming systems that involve whole body movement like Wii and Microsoft Kinect could be used as a tool to battle obesity in children in the United States. But many people have legitimate fears that video games could lead to addiction, social isolation, or excessive violence. Despite these concerns, research has shown that video games may be beneficial for reasons other than weight loss or hand-eye coordination. This research has suggested that there are neurological benefits of video games that could vastly outweigh the cons!

Research has documented such benefits of video games extensively in the last decade. Though “action” video games are those that people have been the most concerned about, surprisingly, they seem to have the most potentially significant benefits. This genre includes popular games like Halo, Call of Duty, and Grand Theft Auto.  Personally, my memories of such games are those of my older brother kicking my butt at Halo, (except when I was in a tank)! But I digress…

One study found that playing an action video game lead to an increase the speed of a person’s reaction time without adversely affecting their accuracy. It doesn’t seem that unrealistic either. Just think back to playing Whack-a-mole. After some practice, you get a whole lot faster and more accurate at bopping those mole heads. In this study, researchers sorted the participants into two groups. The first played an action game, such as Call of Duty or Unreal Tournament, and the second group played a non-action game, The Sims. Participants in each group played these games for 50 hours each week over a period of 8-9 weeks. That’s like having a full-time job of playing a video game for a period of 2+ months—an awesome job for some, and maybe more like torture for others. Not only did those who played action games have improved reaction times, but this benefit extended to tasks that were unrelated to the action video games themselves.

A similar study used action video games to look at differences in spatial attention in males and females. Spatial attention refers to our ability to find an object in space, and gather and organize information, sort of like creating mental map of your hometown. Typically, males have a higher level of spatial awareness than women, primarily due to the types of early activities, like sports, they play and that they likely play more video games.  Since spatial awareness is thought to contribute to career selection, it may partially explain why more men than women careers in the STEM fields (though there are obviously more issues at play, such as discrimination in hiring and admission). Regardless, researchers wanted to determine if video games could help to train away this difference between men and women. What they found was amazing! Not only did action video games enhance the spatial awareness of both males and females, but females saw so much improvement that they completely overcame the pre-existing gender differences. If video game training can eliminate the gender differences we see, it could potentially help women break into currently male-dominated fields.

Video games as tools for rehabilitation and training

Video games have been proposed as potentially useful for rehabilitation and job-related training. Those games that enhance coordination, reaction, and the ability to precisely move your hands and finger have been proposed as potential tools for physical therapy of patients recovering from stroke. Similarly, such tasks could also provide job training in fields that require a high degree of precision, like surgery. Video games that benefit how well we process and remember information may prove useful for the elderly or victims of brain trauma.

Despite all this research, few people designed games with the intent to train a person’s mind. Until Adam Gazzaley.

Gazzaley is a Mount Sinai-educated MD, PhD who has taken his interest in video games and the brain for a spin. Literally. In 2013, Gazzaley and his team at the University of California-San Francisco published a study, which used a video game called NeuroRacer. In this game, participants drove a car along a road, while responding to signs that would pop up on the screen (check out a video here). In this way, the game was able to not only assess, but to train multitasking. Typically, our ability to multitask declines as we get older. However, after playing a version of NeuroRacer that specifically trained this skill, the elderly participants found they were able to multitask more easily. Not only that, but this improved ability to multi-task lasted for months after the experiment. Participants even saw improvement in unrelated areas such as memory and attention.

There are definitely intentional and unintentional benefits of action video games. Though the parents among you may not be ready to let your kid play Call of Duty instead of doing their homework, maybe it will reassure you to know that courses such as “Gaming for the Greater Good” are being taught at the University of Michigan. If that doesn’t make this stuff legit, I don’t know what does!

Personally, I think I’ll take my brother up on it next time he wants to play Halo, even if he continues to kick my butt. Maybe I’ll even try to convince his wife to join in.

In the meantime, game on, my friends! 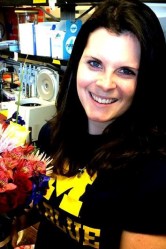 Ellyn Schinke is a third-year Microbiology & Immunology PhD student at the University of Michigan. She studies the bacteria Streptococcus pneumoniae, a bacterium that causes pneumonia, meningitis, and ear infections, under the mentorship of Suzy Dawid. This bacteria is very competitive and able to adapt within its environment, partially through the formation of complex communities, called biofilms. In these communities, the bacteria are able communicate with each other using multiple genetic systems to aid in their survival. Understanding how these systems work in this biofilm community is the goal of her research. When she is not working in lab, Ellyn enjoys photography, music, blogging, running, traveling, writing, reading, and promoting life balance as a health & fitness coach. She has even been known by her lab mates—perhaps annoyingly—to burst into song and dance in lab! Follow her on Facebook and Instagram!

Read all posts by Ellyn here.