Shining a Light in the Dark (Universe): Cosmology Results From the Dark Energy Survey

There is a lot we don’t know about our universe. In fact, all of our laws of physics describe only the ordinary matter and energy that surrounds us, a mere 5% of the total matter and energy in the universe. Little is known about the remaining 95%, comprised of dark matter and dark energy. Setting aside their unbearably creative names, dark matter and dark energy are two of the biggest mysteries in cosmology today. What are they made of? How do they interact with the regular matter we’re already familiar with?

The focus of this article will be dark energy (dark matter could fill an entire post on its own!). In the 1920s, scientists discovered that our universe is expanding, but it wasn’t until 1998 that we discovered that the rate of this expansion is accelerating. This finding was thoroughly unexpected. Since gravity is an attractive force, most scientists expected the gravitational attraction between galaxies to cause the expansion rate of the universe to slow down. Discovering that the expansion rate is actually increasing suggests that an additional, repulsive force is pushing galaxies apart at increasingly faster rates as time goes on. This force has been given the name “dark energy” although, truthfully, we have no idea what it really is — is it a new fundamental force of nature, an intrinsic property of empty space, or something else entirely? One of the big questions astronomers are trying to answer is how dark energy has behaved over the age of the universe: has it had a constant effect (i.e. the so-called “cosmological constant” proposed by Albert Einstein in the early 1900s) for the past 14.5 billion years, like a persistent wind? Or have its effects instead varied during that time, perhaps like a steadily increasing wind leading to the climax of a storm or a changing wind on a particularly blustery day?

Enter the Dark Energy Survey (DES). DES is the most ambitious cosmology experiment to date, with the goal of imaging the faintest objects in the largest area of sky ever attempted by a ground-based survey (this is in contrast to space-based surveys, which have no atmosphere to contend with and the ability to measure the entire sky without needing to be exactly on the Earth’s equator). Over the course of five years, DES astronomers are using a new camera installed on the 4-meter Blanco telescope in Chile to measure galaxies as far as 6 billion light-years away — that is, DES astronomers aim to observe light emitted 6 billion years ago from distant galaxies that is just reaching the earth now! Nearby galaxies are easily discerned from those that are 6 billion light-years away using the concept of “redshift” — as light travels across an expanding universe, the distance between successive peaks of the light wave increases due to the expansion. This increases the wavelength of the light and makes light from farther away appear redder. With a dataset of hundreds of millions of galaxies in hand, from very nearby to 6 billion light-years away, astronomers will be able to study, very precisely, the (relatively) recent history of the universe for the first time.

Probing the Nature of Dark Energy

Prior to DES, the best results on dark energy came from the Planck survey, a space-based experiment. While Planck’s results are spectacular, they are derived by studying the Cosmic Microwave Background (CMB), the earliest light emitted when the universe was only 380,000 years old. Why should we expect cosmological parameters from the infant universe to still hold true today? After all, a lot of time has passed since then — 13.5 billion years, to be exact.

DES was designed precisely to address this issue. It will measure four specific astrophysical quantities, each yielding different but complementary pieces of the dark energy puzzle, and shine a light in the dark universe and learn about dark energy from the late-time universe (i.e. post-CMB….yes, 13.5 billion of the 13.8 billion years of our universe’s existence are considered “late-time”). The recent results from DES measured two of these four quantities:

By studying weak lensing and BAOs jointly, DES astronomers can learn about both the “clumpiness” of our universe, and therefore the strength of dark energy, and the total matter content of the universe.

And here are the results! The key things to take from this plot are as follows:

Why are these results so exciting? The most precise measurements of dark energy thus far have been made by studying the CMB. On the other hand, DES aims to produce similarly precise measurements of the universe from about 6 billion years ago until the present day. And they agree spectacularly well! The scale of this feat was summarized nicely in the press release announcing these results:

“Imagine planting a single seed and, with great precision, being able to predict the exact height of the tree that grows from it. Now imagine traveling to the future and snapping photographic proof that you were right. “

Never before has a ground-based survey studying the late-time universe been able to produce cosmology results competitive with those obtained from the CMB, primarily because the measurement of weak lensing requires an enormous sample of galaxies, such as what DES provides. And DES is just getting started — these results used only 30% of the anticipated final data set. The best is yet to come!

These results are summarized in the first paper located in the link below. If you’re feeling especially ambitious, feel free to browse through any of the other 10 papers that contributed to the analysis: 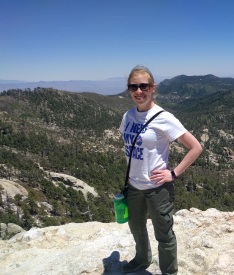 Stephanie Hamilton is a 4th-year physics graduate student and NSF graduate fellow at the University of Michigan. Her work focuses on studying the orbits of the small bodies beyond Neptune in order learn more about the Solar System’s formation and evolution, in addition to discovering many more of these small bodies using a fancy new camera developed by the Dark Energy Survey Collaboration. Outside of work, she likes to read sci-fi books, binge TV shows, write about her travels or new science results, or force her cat to cuddle with her.

Read all of Stephanie’s posts here.