The Stories of Science we Never Considered

I first read The Disappearing Spoon in 2012 while I was home from grad school on a break. As a chemical engineering student, nothing appealed more to me than a book about the periodic table. And I’m not referring to a typical chemistry textbook that discusses the different trends in the table as you go from left to right or top to bottom. This is a book that weaves together science, history, and the impact that the subjects of Mendeleev’s kingdom have had not only on the world but also on their discoverers.

Sam Kean, the New York Times best-selling author not only of The Disappearing Spoon but also of The Violinist’s Thumb, The Tale of the Dueling Neurosurgeons, and Caesar’s Last Breath, has taken his passions for science, history, and writing and melded them together to create four books that were each Amazon’s top science book of the year. The books cover the periodic table, DNA, neuroscience, and the alchemy of air, respectively – all vastly different from one another yet equally enigmatic.

Kean, who holds bachelor’s degrees in physics and English literature from the University of Minnesota and a master’s in literary science from the Catholic University of America, says that part of the adrenaline rush in writing books of such varying topics is the constant intrigue each subject provides. He says that while he was initially intending to pursue a purely scientific career, he realized that lab work was not his forte. This was one of the first moments where I realized that he and I have a lot in common.

I, too, realized that lab work was not for me. Labs are hazardous environments, which caused me great anxiety. So much so, that my hands would shake and I would squirt concentrated hydrochloric acid EVERYWHERE (except into the intended graduated cylinder).

And that’s the reason I became a computationalist. 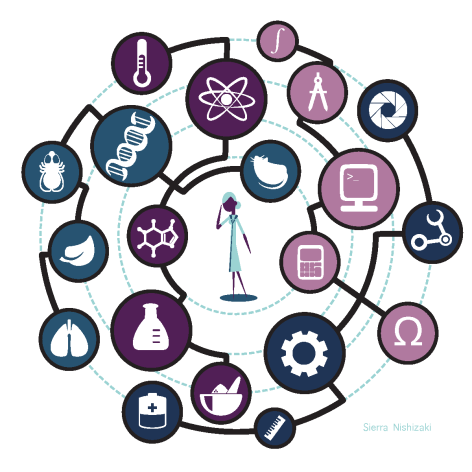 In spite of his decision to leave behind the lab environment, Kean’s scientific training has contributed not only to the rigorous research involved in his books but also to the analysis of some of the data he presents. For Caesar’s Last Breath, he performed some of the calculations to help determine if any of the air molecules we inhale are the same ones Caesar breathed. Although he admits performing experiments can be exhilarating, Kean’s true passion lies in writing about the science itself. “[I] get same sense of satisfaction out of building a story and drafting the words on the page. [I] get more satisfaction with writing than actual building. [I] don’t feel very bereft without hands-on science.”

Additionally, Kean says that he was not interested in focusing on one particular area of science, and instead writing provides him with the freedom to move among different topics. Moreover, his work now provides not only a source of information, but also a source of joy to the public. “Just because [a story is] about science doesn’t mean it can’t be a good story. Science is a human enterprise.” This resonates with me deeply.

As a graduate student I am becoming specialized in a particular area of science, and therefore I am required to have a very narrow focus. But just because my thesis research is on the quantum dynamics of charge transport in photosynthetic reaction centers doesn’t mean my interest stops there. I find particle physics and marine biology endlessly fascinating; so I find other graduate students who specialize in those areas and glean what I can from them. I enjoy writing immensely and have found an outlet through my own blog and MiSciWriters. And I have realized that the more I write about my work, the more I’ve come to appreciate it.

I am starting to see how my research is somewhat similar to a mystery novel; however, instead of trying to figure out “Whodunnit?” I’m asking myself, “What is its purpose?” I’m not solving a murder or investigating a robbery, but I do have to ask myself similar questions. What evidence is available and how can it create a launching point to finding the next piece of the puzzle? What patterns exist and how can they be extrapolated? What is the motive behind it? Is there a similar problem that was solved, and, if so, how can I draw a parallel between it and my problem?

There’s a plot, a motive, evidence, a list of suspects (possible solutions), their alibis (the evidence for why that solution doesn’t work), investigations, and a series of analyses. Sometimes assumptions have to be made, which can potentially be the case’s undoing; and yet they are an essential part of finding the right solution and building intuition. These are critical skills for any scientist. In fact, one of the greatest mystery series of all time, Sherlock Holmes, was built off Sir Arthur Conan Doyle’s training as a doctor. While I am definitely not at the literary level of Sir Arthur, I can see the parallel between conducting research and telling a story.

Kean explains how to use the breakthroughs in scientific research to narrate that story. For his books, he chooses a general science theme and then tries to find stories related to that theme from many aspects: “…politics, art, music, war, poison, industry, etc. Jump into things [you] wouldn’t normally connect to science. [I’m] always looking for good stories to include [and] a good character to fit in [with] conflict, drama. Science fits in around that.”

Kean adds, “Science doesn’t stop at the lab door. [You] can talk about science’s impact on people’s lives [and] about science moving and inspiring people, beyond just straight material gains.”

This is especially important in our current media environment, which has become somewhat untrustworthy of science, especially in topics such as evolution, vaccines, climate change, and Western medicine. I’ve been involved in a few debates with anti-vaxxer friends and others who swear by only using holistic methods and rail against doctors and the pharmaceutical industry.

I’ve met people who claim that adjusting water’s pH will cure cancer, that drinking apple cider vinegar and baking soda can help prevent cancer, and that doctors deliberately try to keep the American public sick for their own financial gain. I cringe when I hear people talk about how horrible they think vaccines are and that global warming is a giant farce.

Needless to say that the scientist inside me sometimes screams in frustration. Telling people the facts that are supported by scientific evidence is pointless because to them the people with the knowledge, experience, and credentials are untrustworthy.

Kean’s suggestion for combating this mistrust is to use empathy, a very difficult thing to achieve when someone is convinced he or she is right, regardless of the facts. “Empathy is probably the key. [It’s a] tribal thing. A lot of people who reject science are coming from places where they see science as inherently political. Science has moved out of [the] realm of esoteric pursuit a few men and women were doing and left alone to do. [Now it has] burst into public consciousness, [which is] good for science overall [because there are] more people involved. [The] byproduct is when science gets important, it becomes an institution which has become politicized. As older generations pass and younger generations come up, they are more science literate. [It’s a] matter of time and acceptance.”

Being able to relate to one’s audience is necessary in order to be heard, as it is exceptionally difficult for a person to change his or her viewpoint, in spite of being presented with the facts. Kean explains, “In some ways, presenting facts is almost beside the point. It’s almost a social point. Presenting facts seems to make people dig in their heels deeper. What people really fear deep down is looking foolish to their peers. Scientists are looking for evidence. People are not looking for evidence or data; they don’t want to stand out or be humiliated or be rejected by peers and loved ones.”

That’s quite an undertaking for people who have been trained primarily to consider the facts and the data that support them. Heaven help me, I tried to be understanding and empathetic toward my friends, many of whom have been suffering from poor health for years. But looking back, I can see that that is where I failed. I can’t blame them for not trusting doctors when they’ve tried so many different things, none of which have worked. But my training requires me to be somewhat disconnected emotionally. Instead of being influenced by feelings, I have to be influenced by the facts. However, it’s difficult to maintain that emotional distance when I have to pour so much of my time and energy into my work. How can I not take it personally when someone slanders this field I love so much, this extraordinary window into a whole other world. But it doesn’t change the fact that empathy, understanding, and sympathy are just as, if not more, important to achieving effective communication.

“The biggest thing is to just do it. Make sure you’re actually doing writing. Spend time every day writing in some capacity even if it never gets published. [It’s] like playing an instrument; [you] have to do it. [There’s a] myth in the arts: sit around and wait for inspiration to strike. [You] need to have skills in place so that when inspiration does strike you can capture it in a meaningful, coherent, and important way.”

Many prodigies have expressed the same attitude. Mozart said, “Believe me, I do not like idleness but work.” Einstein is quoted as saying, “It’s not that I’m so smart; it’s just that I stay with problems longer.” And Picasso stated, “Inspiration exists, but it has to find you working.” As with all things in life, excellence demands hard work. But in the end, what you have accomplished will tell an amazing and beautiful story.