It is not directly apparent, but a lot of computer code is working behind the scenes to allow you to read this article! In fact, computer code runs a lot of the modern world. Computer and mathematical occupations are the sixth-fastest-growing of 22 major occupational groups in the U.S., and are projected to account for 4.3 million American jobs in 2020.

This week (December 3-9 in 2018) is Computer Science Education Week, an effort to encourage K-12 students to take interest in computer science, frequently observed with Hour of Code events. Unfortunately, only 35% of high schools teach computer science. Furthermore, fewer than one-fifth of Computer Science graduates are women, and the gender gap is getting worse. To try to bridge this gender gap, a University of Michigan graduate-student led organization, Girls Who Code at University of Michigan Department of Computational Medicine and Bioinformatics (UM DCMB), pursues computer science education year-long through K-12 educational outreach efforts primarily serving young women. GWC at UM DCMB is a recognized Voluntary Student Organization (VSO) founded by doctoral students in the Bioinformatics graduate program in 2017. The organization, led by an eight-woman Executive Committee, coordinates a weekly Girls Who Code (GWC) Club as well as extensive K-12 educational outreach efforts.

About Girls Who Code at UM DCMB

Girls Who Code (GWC) is a national organization which aims to support and increase the number of women in computer science and is working to close the gender gap in the technology field. In the 2017-2018 academic year, 30,000 girls and 3,000 volunteer facilitators participated in the Clubs program in all 50 states. Interested persons can sign up to lead a GWC Club in their local community and are provided with a curriculum that teaches website and application development through programming languages like HTML and Java. However, what sets GWC at UM DCMB apart from other GWC Clubs is the specialized curriculum focused on computational data science using the Python programming language.

For the last three years (2016-2018) Data Scientist has been ranked as the #1 best job in America, and by leveraging the expertise of our graduate student facilitators, the goal of GWC at UM DCMB is to help expose and prepare high school women for possible careers in this fast-growing field. Extracurricular opportunities like Girls Who Code provide hands-on experience with great impact—75% of girls who participate in STEM (Science, Technology, Engineering, and Math) clubs understand the types of jobs they could do with STEM knowledge compared to 53% of those who do not participate in these activities.

The inaugural GWC Club met weekly from September 2017 to May 2018 on the UM campus. The Club included 15 high school women aged 14-17 from 10 local high schools. A rotating contingent of graduate student facilitators provided a collaborative and supportive environment for Club members and contributed 230 woman-hours of mentorship. Through DataCamp for the Classroom GWC at UM DCMB taught Club participants introductory and intermediate Python for Data Science. Skills were reinforced through presentations and demonstrations on core coding concepts and interactive learning through coding challenges. The curriculum was augmented to include weekly presentations by female computer scientists from both industry and academic settings describing their work, research, or career journeys. This exposure is a key component, as girls cite lack of female role models in STEM as a key reason for not pursuing an education in the STEM field. For the latter half of the academic year, Club members used their programming skills to complete data analysis Capstone Projects with topics ranging from sentiment analysis of Trump tweets to cardiovascular disease mortality in the United States.

Ten of the 15-participant inaugural class graduated from the program in May 2018. They presented their Capstone Projects to families, friends, and the graduate student facilitators to showcase their analyses of unique datasets using the Python programming skills they had learned. Through evaluations of the participants’ experiences, GWC at UM DCMB assessed the effectiveness of the program. 70% of participants feel as if they definitely improved their Python programming skills; and on a scale from not at all to definitely, the majority of participants feel as if they improved their critical thinking skills (Figure 1). Participants were asked about their career goals or planned college major and how participation in GWC potentially changed them:

“Before, I was interested in medicine. Now, I plan to incorporate coding into that.”

“From undecided major to now perhaps a major in Biotechnology”

“Because of GWC, I learned about bioinformatics. I was very interested in it, because it combined my interests: programming and research science…I’m pretty certain I want to go into bioinformatics now.” 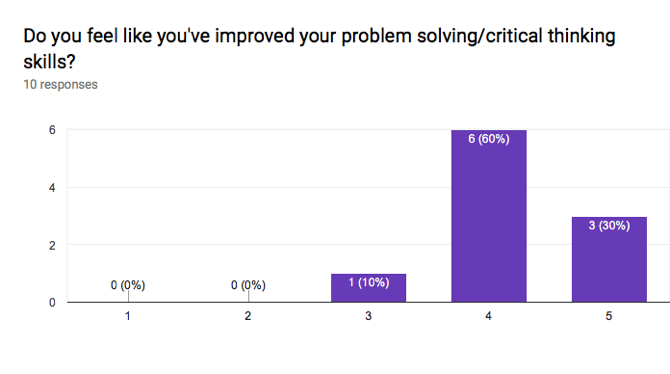 Figure 1. With 1 being “Not at all” and 5 being “Definitely” our participants feel as if they improved their problem solving and critical thinking skills.

GWC at UM DCMB had 31 applications for 17 spots for the 2018-2019 GWC Club. Several participants drive over an hour one-way to attend, with one student commuting from Canada. In the spirit of diversity, equity, and inclusion, GWC at UM DCMB offered Transportation Grants this year to make the weekly travel commitment more feasible to students from less financially privileged backgrounds. When applicants for the 2018-2019 Club were asked why they wanted to participate, they provided the following responses:

“I appreciate that this class is for girls in coding specifically, which seems like a much more welcoming environment.”

“I’m interested in GWC because being a girl myself, it is refreshing to know that there is a special group of girls like me with the same passions and goals.”

“Our world is increasingly run by software and I am interested in being someone who runs it.”

“Usually everyone into coding is a boy at my school, and it’s cool this is a girls only club.”

Outside of the weekly Club meetings, GWC at UM DCMB fosters partnerships with other UM organizations to lead instructional activities for K-12 STEM education. The Executive Committee led efforts to develop a curriculum to teach programming and robotics for events such as the Females Excelling More in Mathematics, Engineering, and Science (FEMMES) Capstone for 4th-6th grade girls, the Association of Women in Science (AWIS) Young Scientists’ Expo for local middle schoolers, and Association of Multicultural Scientists’ Science Career Day for Wolverine Pathways scholars. In an effort to widen their impact, GWC at UM DCMB makes their educational materials publicly available and accessible on their Github page. The 2018-2019 Executive Committee is eager to expand its outreach efforts and is planning a week-long 2019 Summer Experience for high school women in Detroit at the UM Detroit Center.

The GWC leadership and volunteer pool is increasingly interdisciplinary, with masters and doctoral students representing the School of Public Health’s Department of Biostatistics, LSA’s Department of Chemistry, and Michigan Medicine’s Department of Microbiology & Immunology, as well as several undergraduate students. These efforts would not have been possible without generous funding from the Office of Graduate and Postdoctoral Studies’ Benard L. Maas Professional Development Grant, DCMB block grants, Girls Who Code Club Funds Grant, and the Endowment for Basic Science. Dr. Maureen Sartor serves as the Faculty Advisor for the organization and DCMB administration provides enthusiastic support and resources. Additionally, many volunteers serving on the Executive Committee and as Facilitators receive training and funding through federally-funded initiatives, including four as National Science Foundation Graduate Research Fellows. NSF Fellows participating in GWC’s efforts to include under-represented groups in STEM are fulfilling NSF’s mission for broad societal impact during their graduate training. The mission of UM is to serve the people of Michigan and the world, and all GWC volunteers are fulfilling this goal by addressing an unmet need for computer science education in the greater Ann Arbor community.

Find out more about UMich’s Girls Who Code at their website (http://umich.edu/~girlswc/) or the national group at theirs (https://girlswhocode.com/).