What Does Smoking Do to Your DNA?

We have known tobacco to be a cause of many cancers for decades now. It is associated with it least 14 types of cancers (see Figure 1). Less understood is how tobacco causes cancer. The short answer—it causes mutations. Tobacco smoke is a mixture of many chemicals, including at least 60 carcinogens (cancer-causing chemicals).

A trans-national team of researchers has begun unearthing the distinct types of mutations caused by tobacco smoke to better understand the biological pathways leading to tobacco-induced cancer. They found that tobacco causes specific types of DNA damage in organs directly exposed to smoke (like the lungs) and that smoking tobacco generally leads to higher rates of mutation in all tissues. Understanding how the chemicals in tobacco smoke cause mutations can help scientists identify new and emerging mutagens and design better treatment strategies.

How Do Mutagens Work?

Mutations are changes to the DNA sequence. DNA is made up of four types of bases (A, T, G, and C), and if the mutation affects the function of an essential gene by altering the sequence of bases, diseases may result.

Mutagens like tobacco smoke produce a distinct set, or “signature” of mutations because of their specific mechanism of action in disrupting DNA. The research team examined 5,000 DNA sequences from patients with different types of cancer (lung, liver, oral cavity, esophagus, bladder, liver, and pancreas) and looked for differences in mutation signatures between smokers and non-smokers.

The investigators also hypothesized that different organs in the body may be affected differently by the tobacco smoke depending on how that organ is exposed. Lungs have the highest exposure to tobacco smoke, and the kidney has none so the 60+ carcinogens in tobacco smoke may reach and affect the two tissues differently.

If mutagenesis were a truly random process, no one mutation type would dominate another. In other words, at a position in the genome containing the base “A,” we would see an A to C, A to T, and A to G mutations in equal measure. But since each mutagen disrupts a different biological process at the molecular level, we see different proportions of each type of mutation depending on which mutagen caused the mutation.

What Researchers Found in Tobacco Smokers

Unsurprisingly, the team found that the total number of mutations carried by the patients, regardless of cancer type, was higher in smokers compared to non-smokers. They also found five specific mutation signatures that were increased only in smokers. One of these, “Signature 4,” an increase in C to A mutation, was only seen in tissues that were directly exposed to cigarette smoke. The authors proposed that this is a result of DNA damage caused by a particular chemical in tobacco called benzopyrene.

Another signature, called “Signature 5,” an increase in C to T and T to C mutations, was seen in both smokers and non-smokers in all cancers, and the number of mutations with this signature showed a “clock-like” increase with age in all tissues. However, there was a 1- to 5-fold increase in mutations of this signature in smokers. Because of the widespread nature of this signature, the underlying mutagenic mechanism is likely accelerated by direct or indirect exposure to tobacco smoke, but not specific to the smoke itself.

According to the lead author Mike Stratton: “The genome of every cancer provides a kind of ‘archaeological record,’ written in the DNA code itself, of the exposures that caused the mutations that lead to the cancer.” Understanding how mutagens work can help us identify the many ways cancer can initialize, as well as lead us to a deeper understanding of the biological underpinnings of cancer, opening up paths to better diagnosis, prevention, and treatment. 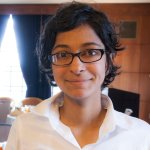 3 thoughts on “What Does Smoking Do to Your DNA?”